Today I'm taking a break from my love for nails and focusing on the love of my life, Tyler.  Today is our 7th  anniversary of being together.  It is also the 5th anniversary of our engagement :D

So let's start from the beginning!  Tyler and I met when we were both working at a restaurant that was owned by my best friend's parents.  I'll admit (I've told Tyler this already so if he reads this it won't come as a surprise ;) ) when I first met Tyler I thought that he looked a lot like Whitey from Me, Myself and Irene (the Jim Carey movie).  As we worked together more we talked more and he finally got up the courage to ask me to the movies.

He said to me while we were working the morning/breakfast shift, "I haven't been to the movies for so long, do you know what is playing?"  Of course, I had no idea as I don't really pay attention to upcoming movies, lol!  Anywho, I came back to pick my friend up from work (she worked the dinner shift and her parents were away so I was staying with her) and he said "you know how I asked about the movies this morning?"  I said "yes".  He said "I was wondering if you wanted to go with me".  (AWWWWWWW *blush*)  This was the very first time I had been asked on a date (I was 17 at the time) so it was a pretty big deal :D

The day of our first date, it was a Tuesday, I slipped and fell in my friend's shower while getting ready for school and had sprained my knee.  So when Tyler came to get me for our date, I had to show him my tensor bandage and hadn't shaved my legs in a while.  I said "don't mind the hairy legs" and when he didn't run I knew he was a keeper ;D

During this first bit of our relationship, Tyler had an emergency corneal transplant which was really scary for me (I wasn't told until after the surgery).  Everything is OK now though :)


In 2007 I got my wisdom teeth pulled on a Wednesday and Tyler and I were to go to his cousin's wedding that weekend.  Everything went well, until we got to the dinner part.. I couldn't eat anything but the cheesecake for dessert.  Tyler gave me his cheesecake as he's not a big dessert person and it was all I could manage to get down.  I actually broke down and shed a few tears at the table because I wanted to eat so badly but couldn't.  And again, I knew he was a keeper!


On October 4, 2007, Tyler proposed! :D  He told me he needed to go to the mall (20 min drive away) to get ends for his earrings (he has the semi-circle ones with the spikes on the ends), so we went after work. We went into the jewellery store and I kept saying, "they aren't going to be here, it's more of something we would find in Claire's, let's go over there" but he wasn't having it.  He said "let's just look around".  As I was wandering around, we made it to the rings and as I'm looking at them he got down on one knee and asked me to marry him.  (AWWWWWW!!!)  Of course I said yes!  I even got to pick out my engagement ring :D But of course, the first thing "logical me" says is "how much are you looking to spend?"  Haha!  It was hard picking just one!  And jokingly I pointed at the $10,000 ring and said "I want that one!"  I decided on a gold band with a .25ct solitaire diamond.  It's not the biggest, it's not the most expensive, but I don't care, it's the most precious piece of jewellery that I own.  All I cared about was that it came from the guy that I loved and wanted to spend the rest of my life with.  Plus, big gaudy rings look stupid on my hands ;) 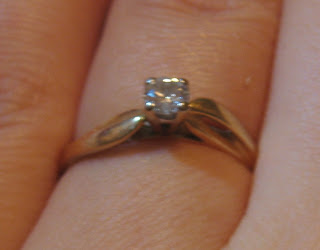 Then in 2008, we went to a wedding on my family's side, with no surgeries a couple days before ;)  We clean up pretty good!

Then in 2010, Tyler's mom brought home a puppy she was planning to keep as her own.  Little did we know that this puppy would become attached to Tyler's hip and would then become our baby Owen!


When Owen came home, it was the Thursday before Father's Day in 2010.  How fitting!  He wasn't even a month old and was so teeny tiny.  The second picture gives you an idea of how tiny he was, he was tinier than the little teddy bear Tyler's mom gave him.  He instantly became our pride and joy.

That fall Tyler left to go to school for a 2 year course to become a personal trainer in London, Ontario.  I don't like change, so this was a pretty big deal for me.  He also took Owen with him :(  It was a big change from seeing him at least one night during the week and every weekend to once every month or so.  I was able to fill my time with visiting my friend often and started into the Twilight craze :D  I travelled, usually every 3-4 weeks, 2.5 hours (1 way) to visit Tyler while he was at school.

When he was home last summer, between school years, we got a few pictures (my sister would be going to school that fall for photography so there was always a camera around ;) ).

This past February, on Tyler's reading week, Tyler and I took a trip (our first one just us in our entire time being together!) to the Dominican Republic.  This was the best getaway!  If we could do it every year I would go in a heart beat.  It was so nice to spend quality time together without a care in the world, for a week anyways ;)  Owen wasn't happy with us when we were leaving because up until that point, he had never been away from either of us for more than a few hours.

Here are some pictures of us while I was visiting Tyler and Owen while Tyler was at school.

And finally, GRADUATION DAY!!! :D :D  I couldn't have been more proud of Tyler on his graduation day! I felt like the Grinch when his heart grew 3 times too big and the Whos invited him to their Christmas feast (not that I'm a Grinch!) :D

So, now that Tyler is home and is done school, we are waiting until he finds a job as a personal trainer before we start looking for houses, we are both still living at home.  Then we'll start thinking about a wedding!

Here is to many more years (and hopefully we can get pictures more often!)!!!