Good morning, and happy Monday!  What is everyone up to this week??  I will be working on getting stuff ready for camping this weekend when I'm not here at work.  I haven't been camping in a year, and I miss it.  I really love camping - that it's an escape from everything, especially when you are in a Provincial Park (campground run by the province of Ontario) with no hydro, no water and sleeping in a tent ;)  This year should be better than last year - we had a fire ban last year because of dry conditions, and it was a terribly windy and stormy weekend.  So far they are calling for decent temperatures and "scattered showers", so hopefully that will change for the better during the week :D

Onto the nails - I saw a post on Crazy Polishes' blog using an MJ Stamping Plate to create a Winnie the Pooh mani, and I knew right away that I HAD to have it!!  So I went to My Online Shop's etsy store to purchase it immediately - good thing I had just the right amount of PayPal money ;)  Unfortunately, she doesn't ship to Canada, so I had to use my US middle man - Amber from And Then There Was Polish - as my shipping destination so she could send it onto me when she got it :D

A few weeks later, it came in the mail and I was SOOO excited, I immediately did a mani with it! 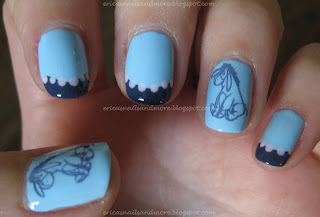 I used Julep Jessica as my base colour, and then stamped Eeyore (my FAVOURITE Winnie the Pooh character!) on my thumb and ring nails with Julep Millie.  Then, using the French Tip Dip that Amber sent along in the package as a surprise, and Julep Millie I created a French Tip on the rest of my nails.  And because Eeyore's bow is normally shown in pink, I used Julep Martha and my dotting tool to create dots along the edge of the French Tip.  I really love how this turned out!  This is my first time using the French Tip Dip kit, and while it's a great concept, it's going to take some getting used to, but I think it will help with creating perfect French Tip manis :D

And I have to say, while I haven't tried all of the designs from the plate yet, the detail is AMAZING!!!  It was hard to capture on the camera because my camera was being difficult, but trust me!  AH-MAY-ZING!! 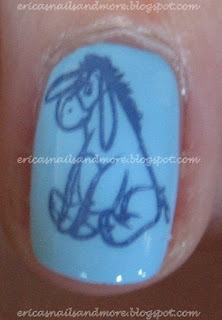 It looks like she no longer has the Disney plate in stock and it was a "Special Edition", so I don't know if she will be bringing it back in stock or not :(  I am so glad I was able to grab this before they were all gone!  I also see that Ninja Polish has a listing for it, but it's Out of Stock there as well.  I have already started thinking about my "W" mani for the ABC Nail Art Challenge ;)
Posted by Unknown at 10:45 am