Hey-o lovely readers!  Can you believe it's already Wednesday!?  I hope everyone has been having a wonderful week thus far.

I know I'm a little behind the times, but I wanted to show you what I got in my September Julep Maven Box.  As you may recall, when the colours were released I wasn't overly thrilled with the options (but I didn't whine about it :) ).  I went with the Boho Glam Box with Gunta (a deep royal blue) and Popova (a kelly green) because I thought they would be something like I didn't have in my collection yet (this is always my goal).

Let's take a look at what I got! 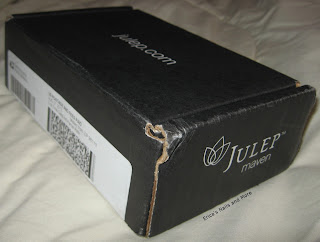 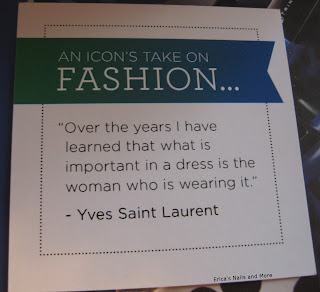 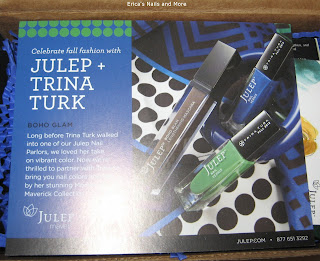 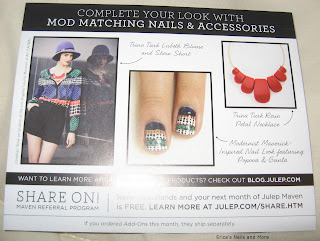 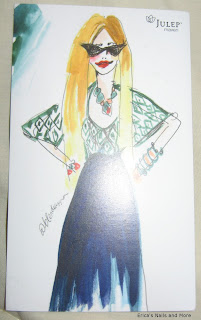 It came with what appears to be a magnet.  I'm not too sure about this, it doesn't really suit my tastes, but oh well :) 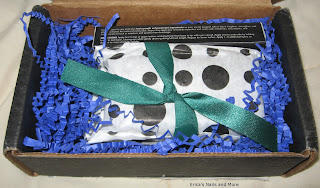 And as always, it's beautifully wrapped and packaged to travel nice and safe!  I love the black and white polka dot tissue paper the polishes were wrapped in :)  Makes me wish I could find this stuff when I'm wrapping birthday gifts for friends and family ;)

So first up -- the mascara.  I saw some people commenting about the fact that there were fibres in the brown mascara, which are there to "add on to" your natural lashes to give them extra length.  So far they haven't cause me any issues, and I have been using this every work day since I received the box (September 6). 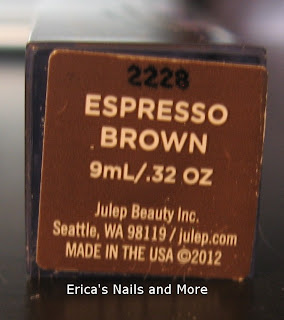 I have light-ish eyelashes, so I was interested to see how this would work on them.  Though I'm blonde, my eyebrows and lashes are a little darker.  I was also interested to find that the brush didn't have long bristles.  This is one thing I don't like about a lot of drugstore brand mascaras.  I'm not the greatest at applying mascara, not going to lie, but I really hate when I have to work with the long bristled brushes that come with some mascaras.  The application with this mascara is very easy and doesn't pull too much at the lashes, which is what I find sometimes with the drugstore brand mascaras.

Here is a before and after shot of my eyelashes.  Please forgive the blurriness, this was my first attempt at taking a picture of my eye and do you know how hard that is??  You can't see the picture you're taking ;)  Also, my eye is slightly red because my allergies are acting up with the change of seasons :(

It definitely darkens my eyelashes and adds the length.  I think that Julep did a great job with this, though my personal opinion is they should try to stick to polish/mani/pedi products rather than adding more makeup products to their line, that's why I love them!

Next up we have Popova.  As some of you may know, I was slightly disappointed to find that this colour is pretty well the same as Emilie.  For me, yes I'm a perfectionist and I can see the difference in the colour of the polishes, but my line of thinking is that I wouldn't be able to tell the difference is someone was wearing one or the other, and if it's "close enough" to what I already have, I don't need it.  The reason I chose this box is because I didn't think that Popova and Emilie would be that close in colour. 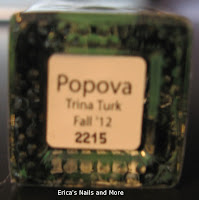 Here are the comparison swatches I did on a nail wheel as soon as I opened my box.  Both are with 2 coats. 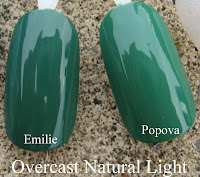 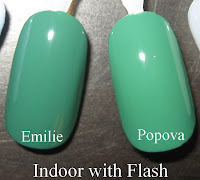 And last but not least, Gunta.  I love this colour!  It is a perfect dark royal blue, and I don't have anything like it! :) 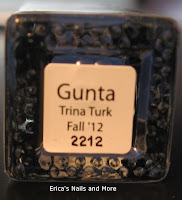 Overall, I'm somewhat happy with this box, but not over-the-moon about it.  If I didn't already have Emilie I would definitely be a happy polisher, but hind-sight is 20-20 and I know now that I should have picked another box.  I will be seeing if my sister would enjoy Popova, and if not I will be putting it up for swap.

What did you think of your September Julep Maven Box?  Did you get colours you were expecting to be a little different from what they actually were?
Posted by Unknown at 12:43 pm